The Meyerhoff Scholarship Program enrolls its first class of students, the M1 cohort of 19 freshmen.

Women are first admitted to the program.

Apple Computers, Inc., donates a computer to each member of the M3 cohort. The company also donated computers for the M4 and M5 cohorts.

The M4 cohort earns a 4.0 GPA across the board during their Summer Bridge classes.

The first class of Meyerhoff Scholarship Program graduates goes on to graduate and professional programs at Northwestern, Princeton, Penn State, North Carolina State University, and the University of Pennsylvania, among others.

The Eli Lilly Company sponsors two students from Indiana, the first Meyerhoff Scholars to come to UMBC from outside of Maryland.

Working with UMBC Howard Hughes Medical Institute Investigator Dr. Michael Summers, Chianna Paschall M4, chemistry, creates a model of one of the dozens of proteins that make up the HIV virus. Her model is featured on the cover of the November issue of the Journal of Molecular Biology.

The Meyerhoff Scholarship Program creates an ongoing partnership with Dr. Thomas R. Cech, 1989 Nobel Laureate in chemistry, through which students complete research internships at his University of Colorado laboratory.

Dr. Kenneth Maton, professor of psychology, and UMBC President Freeman Hrabowski publish their first study based on the Meyerhoff Scholars’ experiences, “Enhancing the success of African-American students in the sciences: Freshman year outcomes,” in School Science and Mathematics.

The Meyerhoff Scholarship Program is opened to people of all backgrounds committed to increasing the representation of minorities in science and engineering.

Damon Tweedy (M4), biological sciences, is the first Meyerhoff Scholar to graduate with a perfect 4.0 GPA.

The Meyerhoff Graduate Fellows Program begins, focusing on promoting cultural diversity in the biomedical sciences at the graduate level.

A gift from the Meyerhoff Foundation establishes The Robert and Jane Meyerhoff Chair in Biochemistry at UMBC and biological sciences professor Suzanne Ostrand-Rosenberg is the first honored to hold this position.

Diversity in Higher Education, Volume 1 publishes, “The recruitment and retention of talented African-Americans in science: The role of mentoring,” by Dr. Charles Woolston, Dr. Hrabowski, and Dr. Maton.

UMBC begins its partnership with The Leadership Alliance, a consortium of more than thirty of the nation’s leading research and teaching academic institutions.

Chester Hedgepeth (M1), biological sciences, becomes the first African American student to receive an M.D./Ph.D. from the University of Pennsylvania and the first Meyerhoff Scholar to achieve the degree. 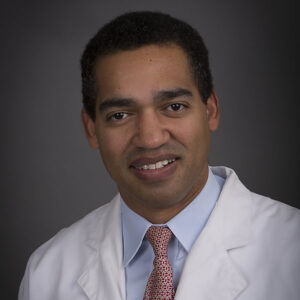 The Meyerhoff Scholarship Program begins an international partnership through the Fogarty MIRT Grant with Lancaster University in England, allowing students to participate either in a one-year exchange program or a summer research opportunity.

Dr. Summers receives the Presidential Award for Excellence in Science, Mathematics, and Engineering Mentoring in recognition of the substantive undergraduate research opportunities Meyerhoff Scholars and others obtain in his HHMI laboratory.

The Journal of Research in Science Teaching publishes, “African-American college students excelling in the sciences: College and postcollege outcomes in the Meyerhoff Scholars Program,” by Dr. Maton, Dr. Hrabowski, and C.L. Schmitt. 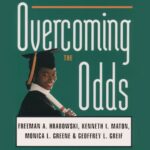 The Today Show features a segment about the Meyerhoff Scholarship Program. 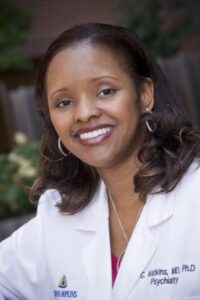 BEST (Building Engineering and Science Talent) cites the Meyerhoff Scholarship Program for its exceptional “Institutional Leadership” in a report to the United States Congress of best practices among university programs leading the way in training minorities in the sciences.

A gift by the Meyerhoff Foundation establishes the Robert and Jane Meyerhoff Science Fund to support teaching and research in the life sciences at UMBC.

The Robert and Jane Meyerhoff Chemistry Building is dedicated in recognition of the Meyerhoffs generosity and commitment to the universal benefits of education.

Dr. Hrabowski and Dr. Summers are invited by the Howard Hughes Medical Institute to discuss the success of the Meyerhoff Scholarship Program at a Symposium on Diversity in the Sciences, held at Harvard University. The following year, they speak again at the University of Louisiana Monroe and the University of Washington.

In an editorial titled, “Why American College Students Hate Science,” the New York Times points to UMBC as an innovator in turning American college students into scientists.

The Civil Rights Project at UCLA publishes, “Opening an African-American STEM Program to talented students of all races: Evaluation of the Meyerhoff Scholars Program, 1991-2005,” by Dr. Maton, Dr. Hrabowski, and M. Ozdemir.

UMBC was featured on 60 Minutes in a segment entitled “Hrabowski: An Educator Focused on Math and Science.” The segment, which aired on November 13, 2011, featured interviews with Dr. Freeman Hrabowski and Meyerhoff alumni and current students. Click on links below to view segments.

Hrabowski: An educator focused on math and science

Getting beyond the grades

Now celebrating its 25th year, the Meyehoff Scholars Program boasts more than 800 graduates, many of whom have gone on to pursue careers as scientists, researchers, engineers and doctors. In a story entitled  “Where Are They Now?” in the August issue of Diverse: Issues in Higher Education, the magazine highlights the successes of six Meyerhoff alumni.

UMBC, the Howard Hughes Medical Institute, Pennsylvania State University, and University of North Carolina at Chapel Hill embark on a 5-year collaboration known as the Meyerhoff Adaptation Project. Under the plan, HHMI investigator Michael Summers and colleagues at UMBC will provide leadership and advice to Penn State and UNC, which will each adapt elements of the Meyerhoff Program to the Millennium Scholars Program at Penn State and the Chancellor’s Science Scholars Program at North Carolina.

An article – “Strength in Numbers” –  and video of the same name are published in the HHMI Bulletin to highlight the Meyerhoff’s program effectiveness and provide more details about the Meyerhoff Adaptation Project.

On August 3rd, Jerome Adams (M4), biochemistry, was confirmed as the 20th Surgeon General of the United States. During his tenure as Surgeon General, Dr. Adams has created several initiatives to tackle our nation’s most pressing health issues, including: the opioid epidemic, oral health, and the links between community health and both economic prosperity and national security. 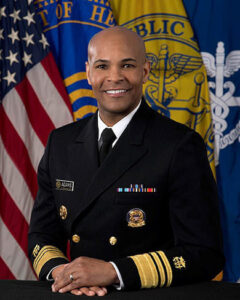 Naomi Mburu (M26), chemical engineering, becomes the first UMBC student to earn the prestigious Rhodes Scholarship. As a Rhodes Scholar, she will be completing a Ph.D. in engineering science and conducting research under Dr. Peter Ireland to work on heat transfer applications for nuclear fusion reactors. 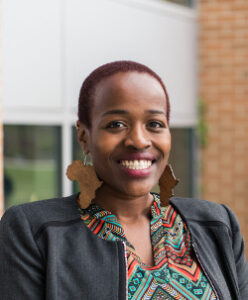 Meyerhoff alumni have an outstanding year. They earned 36 Ph.D. degrees, which is the most ever in one year for the Program.

Letitia Dzirasa (M11), biological sciences, is named as the new Baltimore City Health Commissioner. She becomes the first African American woman to serve in the role. 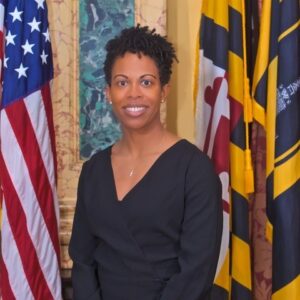 On April 9th, Priscilla Chan, co-founder of the Chan Zuckerberg Initaitive (CZI), announced a gift of $6.9 million to support a unique partnership to replicate UMBC’s Meyerhoff Scholars Program at UC San Diego and UC Berkeley. The CZI grants, over five years, allow the San Diego and Berkeley campuses to apply many of the models successfully used in the Meyerhoff Program.

Mrs. Earnestine Baker, Executive Director-Emerita of the Meyerhoff Program, was honored by the National Society of Black Engineers – Baltimore Metropolitan Area Chapter at their 30th Anniversary Gala with its inaugural Legacy Achievement Award. This honor was given to select individuals who have made a substantial impact in the STEM arena either in academics, innovation or community service in the Baltimore city or the surrounding areas. These individuals have epitomized the mission of NSBE to increase the number of culturally responsible Black engineers who excel academically, succeed professionally and positively impact the community. 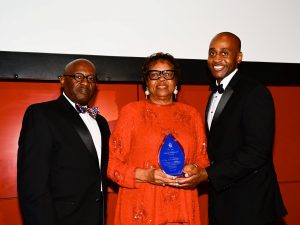 Kizzmekia Corbett (M16), biological sciences, becomes the first Black woman in the world to create a vaccine by leading the effort to develop the technology behind the Moderna and Pfizer COVID-19 vaccines. 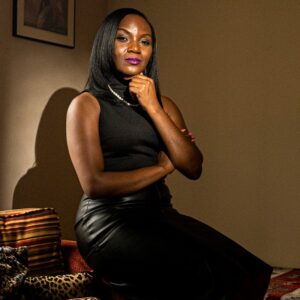 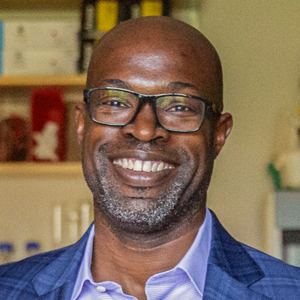